It is close to Christmas eve and I just put all my gear to garage for a bit. If you consider that since august I was sailing  in Czech then is not bad at all.

Noteworthy two autumn moments. First one was sailing and filming our last North Sails episode with Marco Lang at my home spot and the second moment was the ultimate big day one week later at the same place.

I was waiting for the filming day for quite some time but my pacience worth it. 11th of Nov Marco arrived and we spent 3 days sailing at lake Nechranice. For the filming we chose the strongest forecast and it was really nice. 8hrs shift on the water sailing 7.8 and 7.0 Warps 016. My personal feeling is that we made best video episode of  this year. You can check this out here and make your own opinion.

And finally the Big Day! I can only say that it was really balistic and belive me when I say balistic then it means balistic. The lake was just boiling. Average over 40 knts with gusts up to 54. Waves like the Nord sea and the temperatures as well. Managed to sail for about 90 minutes on my smallest gear (72+4.2). Sometimes strugelling to hold the gear down sometimes nice fly over the horizon. Even tried and almost landed few starboard tack backloops. Damn it that felt good! Who cares I was destroyed like I never sailed before. Pure radical nature. I think it was the biggest day at the lake I ever expirienced.

…and that’s it for 2015. Up and down year full of those moments. Hope I can come back next year. Still working on my calendar as some true changes are coming  but I know already that mid of Feb I go back to my second home Tarifa to get ready for the next season however it will looks like. 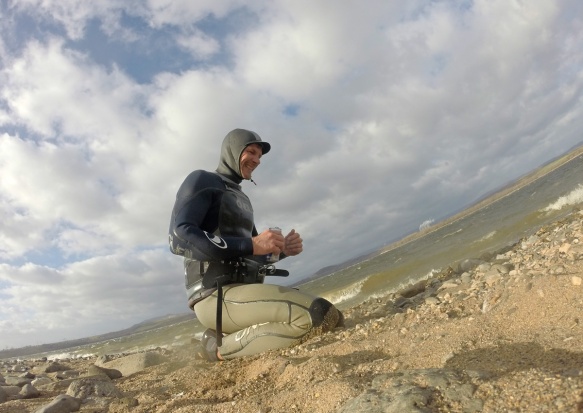